For Everyone's Safety & In Order To Ensure A Fun Time Is Had By All, We Have A Few Rules... 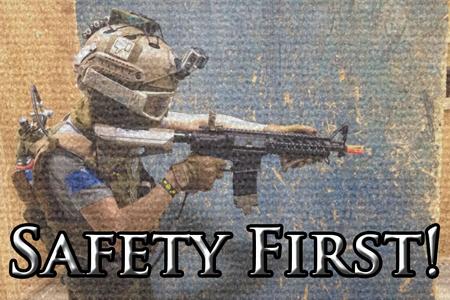 ​General Weapon Rules
- All airsoft guns brought in from outside must be tested on our chronograph before they can be used on the field.
- For all airsoft guns, the maximum allowed muzzle velocity is 365 fps with .20g BB’s as measured by our chronograph. This applies to all airsoft rifles, shotguns and pistols whether powered by spring, battery, gas or CO2.
- No homemade weapons of any kind allowed without approval from the head referee.
- Soft plastic or rubber knives are allowed. To make a “kill” with such a knife, gently touch and make a cutting motion with the knife on an opponent’s torso. Do not stab with a plastic knife or throw it.
- Airsoft BB Grenades / Sound Grenades / Thunder B’s  / Stun Grenades etc
- The Head Referee will decide when Airsoft Grenades can be used in a game. We reserve to right to disallow Airsoft Grenades at any time, for any reason.
- Understand how to safely load and use your grenade before coming to Stryker.
- For the safety of all players, anyone who, in the opinion of any Stryker employee, does not seem to fully understand how to load or use an airsoft grenade will not be allowed to use it.
- Grenades are to be tossed gently underhand at foot level.
- Do not throw grenades over walls.
- Do not toss directly at any person.
- Do not fill Airsoft Grenades with material other than plastic airsoft BB’s
- Pick up any used shells when you are done using your grenade.
- Use at your own risk.

Battlefield Rules
- For your safety, Full facemasks, or approved alternatives, MUST be worn at ALL times while on the battlefield.
- Removing your mask the 1st time will result in a warning.
- Removing your mask the 2nd time will result in your sitting out for 2 rounds.
- Removing your mask the 3rd time could result in your being asked to leave.
- No arguing, fighting or physical contact of any type is allowed
- Any involved players will be required to sit out 1 or more games or asked to leave at the discretion of the Head Referee. Permanent banning from Stryker is also possible if the situation is deemed serious enough by the general manager or owners.
- Report any complaints about another player to a referee. Do not confront other players directly.
- When you receive a direct hit to your body or head gear (not a ricochet) you are considered “Hit”. Call out “Hit” loudly and then walk back to the loading area with your hands held up high to alert other players not to shoot at you.
- Do not talk or give visual clues to other players on your way out
- Cheaters will be asked to sit out or to leave at the discretion of the Head Referee
- As a general rule, guns should be kept on Semi-Automatic. Occasionally, referees will allow Full Automatic which is intended for longer distance cover firing.
- Only Semi-Automatic is permitted in any of the buildings or structures
- If you are within 10 feet of another player, rather than shooting at close range, point your gun at your opponent and call out "Bang Bang" to “kill” your opponent. If there’s a tie, both players are dead.
- Do not shoot at the referees.
- Do not shoot at ‘dead’ players who are leaving the field with their hands or weapon held up.
- Do not fire blindly around corners or through openings. You must be looking at your target.
- Do not point your weapon or shoot towards the ceiling or lights.
- Do not move any obstacles
- Do not climb on any obstacles.
- Do not aim lasers at other players’ faces.
- The use of a video camera like a GoPro is a privilege that is usually allowed, but which can be denied at any time, for any reason, at the discretion of the head referee or management.
- Do not use foul language or behavior.
- Repeat offenders will be asked to sit out or to leave at the discretion of the Head Referee
- Before Returning to the Player Staging or Loading Areas from the Battlefield…
- Remove the Magazine from all of your weapons
- Shoot into the barrel at the exit of the field to clear your weapon of any BB’s that may still be in the chamber
- Put the Safety On
- Put a Barrel Sock on Rifles
- Put pistols into holsters
- Put grenades into pouches
- Right or wrong, the referees' call is final. His/her responsibility is to oversee the general conduct and safety of games, to ensure player adherence to the rules and to facilitate the smooth flow of games. Sometimes a decision may go against an individual for the sake of the group.